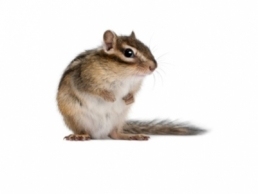 Chipmunks in your garage or under your deck? Chipmunks chewing wires or eating your birdseed and pet food? Call your local Critter Control office today for effective chipmunk removal and exclusion services.

Chipmunks are closely related to squirrels, and these rodents like to stick mainly to the ground and dig burrows for food storage and shelter. Chipmunks can climb trees and over structures like fences, which can lead to conflict between them and property owners. Controlling chipmunk populations is very important because their numbers increase rapidly and they can perpetrate severe damage to building structures and vegetation.

Most chipmunk species are native to North America. While woodland areas are their favored nesting location, the small, elusive critters are often also seen darting from cover to cover in suburban areas and rural environments. Chipmunk burrows are usually situated near shrubbery or manmade structures, which provide the right cover. Our cold winters drive the rodents underground until warmer weather returns. Until then, chipmunks feed on stored food they have gathered throughout the previous warm months.

Though occasionally spotted inside buildings, these rodents prefer outdoor environments. Chipmunks need things like shrubs and bushes because they provide them with a cover of which is not usually found inside homes. Their favored food sources, such as seeds, nuts, and vegetables will attract them to lawns. Uncovered pet food also serves as a viable food option for hungry chipmunks and may lead them onto private property.

What Type of Damage Chipmunks Can Cause

Chipmunks are considered pests because they eat flower bulbs, dig for seeds, and consume numerous vegetables found on lawns and in gardens. Also, if they decide to reproduce near you, chipmunks can cause damage to structures while burrowing to make a nest. Foundations, patios, and sidewalks are at increased risk during an infestation. The rodents are also known to steal bird eggs, which can negatively impact local bird populations.

Control and Safety Around Chipmunks

Gardeners can attempt to surround crops with fencing, but chipmunks possess the athletic ability to climb over or burrow under such barriers. To reduce the possibility of chipmunk infestations, individuals should attempt to remove their desired foods from the immediate area, such as the seeds found in birdfeeders. However, eradicating all sources of food is difficult because chipmunks are very resourceful.

When basic deterrents and exclusion methods fail, Critter Control can step in to save the day. Simply waiting for chipmunks to leave is a mistake that only allows infestations to escalate. Be proactive and trust our trained technicians to eradicate the pests as swiftly and humanely as possible.

We can help you get rid of chipmunk problems.