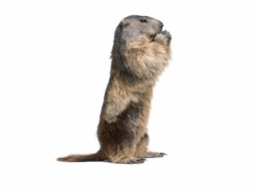 Rats (Rattus spp.) have caused more human suffering and more economic damage than any other vertebrate pest. From causing plague epidemics (the “Black Death” of Europe) to rat-bite fever, whether feeding on stored grain or gnawing electric wires, rats are enemies of humankind.

Groundhogs, also known as woodchucks or whistle-pigs, are some of the largest members of the squirrel family. Their winter hibernation habits have given rise to the holiday Groundhog Day, which supposedly predicts whether there will be an early spring or a lengthy winter each year. Woodchucks are able climbers and adept swimmers. They can often be spotted in fields or along roadsides throughout the Eastern United States.

The short, squat animals are slow, awkward runners, but the claws on their front paws make them proficient diggers. Groundhogs range from 16 to 25 inches in length, weigh anywhere from 5 to 10 pounds, and are recognizable for their brown coats. Eyes and ears placed near the top of the head allow the pests to peek out of their burrows and survey the area for danger. When startled, groundhogs whistle shrilly as they scurry back to the safety of their dens.

Groundhog dens can be very deep, large, and may contain dozens of feet of tunnels. Subterranean chambers in the tunnels serve specific purposes, such as waste collection and nursing. They prefer to dig these burrows in dry, gravelly earth, such as that found in open grasslands, meadows, farm fields, the edges of forest clearings, and grassy roadsides. Groundhogs are found as far north as Alaska, east to New England, and as far southwest as Oklahoma.

Are groundhogs known to enter homes or yards?

During the spring, summer, and early fall when groundhogs are active, they tend to stay within 150 feet of their burrows. Their limited range and herbivorous diet leave woodchucks with no reason to enter human homes. However, their feeding habits do lead them into yards and crop fields in search of grasses, vegetables, and other tasty plants. Groundhogs may dig burrows near houses, roads, and walls as they like to place the entrances to their dens at the base of solid objects.

Woodchuck Can Cause Damage

Do groundhogs harm people or property?

Groundhog attacks against humans are incredibly rare and must be treated as an indication of rabies. For the most part, groundhog damage is limited to properties like farms, orchards, gardens, and lawns. The rodents are responsible for significant losses of crops, such as soybeans, peas, carrots, lettuce, alfalfa, apples, and flowers. Burrowing activities wreak havoc on building foundations, roads, driveways, lawns, and embankments. Farm equipment and livestock can also become damaged or injured by obscured burrow holes.

Wire mesh fences can be used to effectively keep groundhogs away from gardens and lawns. Fences should be buried at least a foot underground and have outward-facing overhangs at the top to prevent the animals from burrowing underneath or climbing over. In some cases, it may become necessary to run the electrified wire around the perimeter of fences.

Since groundhog burrows have multiple entrances and exits, traps should only be set by trained professionals. Although woodchucks do not actively attack humans, they may scratch or bite when cornered or threatened, and residents should never attempt to handle the animals. Critter Control wildlife experts are trained to safely deal with nuisance groundhogs and fully equipped to handle trapping, removal, and control operations within the confines of the law.

We can help you get rid of woodchuck problems. Call Critter Control of Boston today to schedule your inspection or text us at 617-975-0440.